» Stepping Down as Alumni President

A radio station was running a competition - words that weren’t in the dictionary yet could still be used in a sentence that would make logical sense. The prize was a trip to Bali.

DJ: “You are correct, Rob, ‘goan’ is not in the dictionary. Now, for a trip to Bali: What sentence can you use that word in that would make sense?”

The DJ cut the caller off and took other calls, all unsuccessful until:

DJ: “You are correct, Jeff, ’smee’ is not in the dictionary. Now, for a trip to Bali: What sentence can you use that word in that would make sense?”

i dont think if this is new to you or not but I'm willing to share this joke.... nakakaiyak eh hehehe

KANO: "What are you sorry for?" 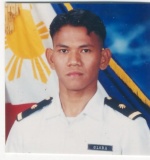 Bob works hard at the plant and spends two nights each week bowling and plays golf every Saturday. His wife thinks he's pushing himself too hard, so for his birthday she takes him to a local strip club.

The doorman at the club greets them and says, 'Hey, Bob! How ya doin?'

His wife is puzzled and asks if he's been to this club before.

When they are seated, a waitress asks Bob if he'd like his usual and brings over a Budweiser.

His wife is becoming increasingly uncomfortable and says, 'How did she know that you drink Budweiser?'

'I recognize her, she's the waitress from the golf club. I always have a Bud at the end of the 1st nine, honey.'

A stripper then comes over to their table, throws her arms around Bob, starts to rub herself all over him and says,

Bob's wife, now furious, grabs her purse and storms out of the club. Bob follows and spots her getting into a cab. Before she can slam the door, he jumps in beside her. Bob tries desperately to explain how the stripper must have mistaken him for someone else, but his wife is having none of it . She is screaming at him at the top of her lungs, calling him every 4 letter word in the book.

The cabby turns around and says,

'Geez Bob, you picked up a real bitch this time.'

BOB's funeral will be on Friday

Host: How can u help improve our economic status nowadays?

Question: IF YOU WERE IN THE GARDEN OF EDEN, WHO WOULD YOU PUNISH? ADAM? EVE? OR THE SERPENT?

Answer: NONE OF THE ABOVE... I WOULD LIKE TO INFORM EVERYBODY THAT I AM CHINESE. I WOULD TEACH ADAM AND EVE NOT TO EAT THE FRUIT. INSTEAD SELL THE FRUIT AND EAT THE SERPENT.

Host : Hey, I heard you almost didn't make it, how did you get here? Did you ride or did you walk?

Gay Contestant : Of course, did you ride. What do you think of me, did you walk?

PINOY INGENUITY?
A Filipino doctor has introduced the use of a device that enlarges a man's sex organ by up to 5 times with no side effects. It is called a magnifiying glass.

A girl asks her boyfriend to come over Friday night to meet, and have dinner with her parents.
Since this is such a big event, the girl announces to her boyfriend that after dinner, she would like to go out and make love for the first time
The boy is ecstatic, but he has never had sex before, so he takes a trip to the pharmacist to get some condoms.

That night, the boy shows up at the girl's parents house
and meets his girlfriend at the door. 'Oh, I'm so excited for you to meet my parents, come on in!'

The boy goes inside and is taken to the dinner table where the girl's parents are seated. The boy quickly offers to say grace and bows his head.

A minute passes, and the boy is still deep in prayer, with his head down. 10 minutes pass, and still no movement from the boy. Finally, after 20 minutes with his head down, the girlfriend leans over and whispers to the boyfriend, 'I had no idea you were this religious.'

The boy turns, and whispers back, 'And I had no idea your father was a pharmacist.'